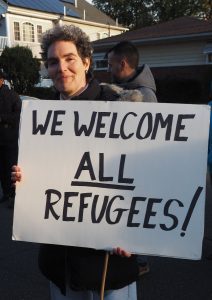 There is a long tradition in Princeton of responding to refugees. Perhaps the most memorable is that of welcoming Albert Einstein who fled the rising tide of anti-Semitism as Hitler established Nazi Germany. Most refugees don’t bring the celebrity of an Einstein.

Refugees aren’t coming to the U.S. because the streets are paved with gold, and they want a better life. They’re coming because they’re fleeing violence and persecution. They’re survivors. They’ve overcome great hardship to get to this country and will work hard. They are going to succeed in America: a large body of research shows and their children contribute to the growth and success of our society.

Our synagogue in Princeton, The Jewish Center, has always helped refugee families – Jewish, Christian and Muslim. The history of the Jews is wrapped up in stories of having to flee, from slavery in Egypt to the Holocaust.

In 2015, in response to the Syrian surge of refugees, members from The Jewish Center, Princeton United Methodist Church, and Princeton Friends Meeting established The Jewish Center’s Interfaith Refugee Resettlement Committee (TJC/IRRC). Our interfaith core group joined to sponsor a Pakistani Ahmadi family through Church World Service. The blasphemy law considered Ahmadis’ heretics and their lives were at risk in Pakistan.

At the same time, Reverend Seth Kaper-Dale was resettling two families through The Reformed Church of Highland Park, and we all compared notes. When the Ahmadi family moved to Des Moines in early 2016, Princeton Human Services asked TJC/IRRC to help a single mom from Cameroon who was a domestic violence survivor.  When we had difficulty finding affordable housing for this family, Reverend Kaper-Dale reached out to the Seminary to arrange housing.

Reverend Kaper-Dale’s church had formed Interfaith Refugee and Immigrant Services and Empowerment (Interfaith-RISE), a coalition of more than 50 congregations in central New Jersey. TJC/IRRC joined – as the Princeton Chapter of Interfaith-RISE. They are a U.S. State Department designated affiliate of the U.S. Committee for Refugees & Immigrants (USCRI).  USCRI works directly with the State Department which, in turn, partners in this work with UNHCR – the United Nations High Commissioner for Refugees.

In 2015 and 2016, the world watched images of fleeing Syrians. Last year we were riveted by images of Afghans fleeing the Taliban, and now we’re all watching Ukrainians fleeing the ravages of war with Russia.

The refugees we’ve resettled in Princeton come here for one of two reasons:

Our committee has welcomed people from Afghanistan, Cameroon, El Salvador, Eritrea, Iraq, Pakistan, St. John, Syria, Tibet, Turkey and Ukraine. We provide on-the-ground support for families when they first arrive. We plan for their arrival, pre-arrange housing, food, and medical care, and meet them at the airport. During the first few weeks, there is government paperwork to be completed and unmet health needs to be addressed. Our case management includes interpretation services along with cultural orientation, English and financial literacy instruction, and enrollment of children in school. All of these tasks are required by the U.S. State Department.

The goal for Refugee Resettlement is Self-Sufficiency – in 90 days!!

Think about this expectation, compounded by PTSD, no local networks and often no English language skills.

As soon as possible, our volunteers provide support in finding employment for the families. In addition, TJC/IRRC provides economic support for housing, job development, and rides for medical care and work as needed. Our dedicated volunteers offer hands on help in welcoming new families.

Examples include helping to set up an apartment for the family, preparing a welcome meal, school enrollment, driving family members to appointments, showing them around town, tutoring ESL, preparing resumes and finding work, opening bank accounts, paying bills, interpretation and translation. We also assist help clients obtain drivers’ licenses – learning the laws and practice behind the wheel. And, of course, we actively raise funds for rental assistance, school supplies, scholarships, transportation, phones, laptops and basic food, cleaning supplies and, of course, there are always unexpected expenses. In addition, bicycles and cars are always needed. The list goes on, and each family is unique. Our number one goal is to give each family the skills and tools it needs to become self-sufficient.

The first family we worked with moved to Des Moines to join the Ahmadi community there. They have thrived with the lower cost of living and their family has grown – they now have four children. Dad has his Commercial Driver’s License and drives a truck. He stops by in Princeton to say, “hello” when he’s on the East Coast. They’re very thankful that TJC/IRRC was able to help them restart their lives in safety in Princeton.

A particularly sad situation in the last year has been the arrival of “single” Afghan men. They were targeted by the Taliban but were unable to escape with their families who are now stuck in frightening conditions in Afghanistan.

We build on a strong volunteer base, hard won competencies, and a history of success in helping refugees establish themselves in their new homes and our community. Princeton’s diverse community and strong public schools make it a welcoming place for refugee families. Led by a steering committee experienced in refugee resettlement, our dedicated volunteers include social workers, teachers, lawyers, and activists. And many others who are able to give a couple of hours to drive a refugee to a medical appointment. Or to take them shopping and use Google translate to explain about all the different types of milk available.

Our belief is that that every community can do its part for refugees, and we want our community, Princeton, to do so. As volunteers, many of us do this work because we recognize our good fortune and know that we can make a difference. Some of us have family stories of how our own parents or grandparents came to this country and struggled to get started. We teach our children by example as we reach out a helping hand, and our involvement with these families enriches our own lives as we build community. Come join our efforts.

Louise Sandburg is the granddaughter of refugees who fled the Cossacks outside Kiev. She grew up in San Diego and has lived in Princeton for almost 30 years. She was an adult ESL teacher in Thailand, Guatemala and in this country with Russian Jewish refugees and Latino immigrants for 20 years before working for Lutheran Social Ministries Refugee resettlement services in Trenton. Louise is fascinated by cultures and has passed that on to her children. Her daughter works for the UN in Iraq and her son lived in China for 10 years. It is the best part of working with refugees – getting insights into different cultures. But also, the most difficult aspect of working with refugees, as the rigidity found in traditional cultures often presents challenges.