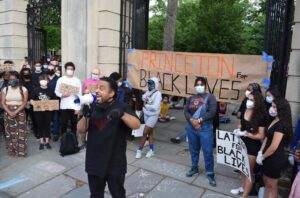 On June 1, 2020, I stood with thousands of students and Princeton area residents in front of the Princeton University campus. We joined with a diverse movement of people across the country declaring that “Black Lives Matter” while protesting the continuing reality of police violence most recently captured in the public murder of George Floyd, Jr. I was handed a megaphone and the first words out of my mouth were, “No Justice!” which was answered by a thunderous response from the people — “No peace!” It was a surreal moment for me as an “Activist Pastor” who came into the movement for justice as a “Student Activist.” As I stood amidst the crowd in downtown Princeton, I remembered the first time I held a megaphone in my hand and shouted the call and response chant, “No Justice! No Peace!” It was May 1, 1992 and I was a college student helping lead a march of thousands of students and area residents in protest of a “not guilty” verdict of the four Los Angeles police officers that had been filmed viciously brutalizing a Black motorist named Rodney King. The book of Ecclesiastes warns us that “What has been will be again, what has been done will be done again; there is nothing new under the sun.”

Our “No Justice! No Peace!” rallying cry then and now serves as both a promise of protest and a tragic statement of fact. Our movements declare that as long as Black people are denied justice, we are committed to disrupting any possibility of peace in the public square. The lifting up of the words “justice” and “peace” also describes that which far too many Black, Brown and indigenous communities have been denied since being brutally enslaved and violently robbed of their land from Africa to the Americas. As familiar as I am with the words of the chant, I have come to understand the critical need for an even deeper understanding of what has become one of the most popular protest slogans. Almost three decades later, I encourage my congregation, community and contemporary Black Lives Matter movement comrades that we must “know” justice and “know” peace!

We must know that justice is more than a courtroom verdict where violent police officers are fired, arrested and wrong doers are ultimately punished for their crimes within the so-called “criminal justice” system. Even in the most “successful” punitive and retributive justice strategies, the systems and the communities that have been violated remain largely unchanged.  I have marched, protested, organized, prayed, funeralized and mourned with families and communities from across the country and the state of New Jersey whose loved ones have been violated by the police. In most cases families and communities never come to truly know justice or know peace.

If any formal state action is even taken, violent police officers are frequently exonerated by grand juries or prosecutors that refuse to bring charges while rationalizing that the officers were “in fear for their lives” and were simply “following procedures.” Police departments are well protected by police union backed policies which secret the identities of officers’ accused of violent misconduct and shield them from punishment unlike any other category of public employee. Police are rarely indicted or convicted of serious criminal charges or assessed civil penalties. This is not the justice that we need and deserve. Our movement must move beyond the demands that begin with retribution and end with only the remote possibility that murderous officers will suffer as they are punished for their crimes.

I am guided by a biblical understanding of “justice” which places an emphasis on repair and restorative transformation of both the individual and the community as a whole. In the bible, the Greek word that is translated into English as “justice” in some places is translated as “righteousness” in others. I am convinced that we must know a justice that will righteously transform the entire system of policing in Princeton and in this country. Concurrently, the Hebrew word that is translated as “peace” in the bible is the word “shalom.” Shalom emphasizes the development of righteous relationships with God, community and within self. This kind of “peace” is different from the “peace” translated from the Latin word “pax” which was used to describe the “Pax Romana” (Peace of Rome). “Pax” is the kind of peace often promoted by the state which emphasizes the call for “order,” “silence” and urges “non-violence” for protesters yet never for police. “Shalom” is the kind of peace that we must know in order to come into righteous relationship with one another.

There is a distinct difference between “keeping the peace” and “making peace.” Governments “keep the peace” with weapons, riot shields, tear gas and police forces functioning as occupying armies with $300k armored “tank” vehicles purchased by the Mercer County Freeholder Board. We cannot purchase peace through preparation for war and there are those in our community that seem to understand that. In the follow up to our local mass mobilizations, I have been encouraged to connect with an increasing number of student activists, taxpayers, and community leaders in the Princeton area who are committed to “making the peace” through the development of strategies to “defund the police.” Over $11.5 million of the 2020 Princeton municipal budget is dedicated to “public safety” expenditures which includes police equipment, weapons, salaries and pensions. It is the single largest line item in the General Budget. Simultaneously, only a minuscule portion of the budget ($1.6M) is dedicated for “health and human services.”

We can and must do better. When we know justice and know peace, we recognize the corrosive and corrupting influence that over-policing has on our communities and even the officers themselves. The painful legacy and reality of the integration of violence and racial injustice has been with us for centuries and the road to reconciliation will undoubtedly be labored and long. However, I am convinced that correct action begins with correct ideas. In order for us to win we must truly know that for which we are fighting.

The Reverend Lukata Mjumbe is a life long activist, community organizer, public policy advocate and the Pastor of the historic Witherspoon Street Presbyterian Church. He is a father, husband, brother and son deeply committed to the continuing struggle for freedom, justice and transformation. He graduated with the highest honors from both Morehouse College in Political Science and Princeton Theological Seminary where he studied Religion & Society.