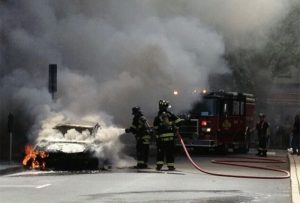 Until a few years ago, Princeton had possibly the oldest volunteer fire department in the country. Volunteering to run into a fire? Yes. 31 such people formed the first Princeton Fire Company back in the late 1700s, and it remained all volunteer for over 200 years. In 2020, what had become the Princeton Fire Department, hired its first fulltime paid firefighters. With 6 paid members, the department still relies on its volunteers. To better understand how someone can dedicate themselves to this heroic role, we caught up with Roy James, who has spent nearly his entire teenage and adult life with the department.

1) Where did the idea of being a firefighter start for you?

Growing up, when we moved into Princeton and my mother, father, sister and I lived with my grandmother. My grandmother loved to cook, but as she got older, she developed dementia. Three times we returned home to find our house was on fire and all three times I ran into the house and while my mom was calling the police and fire department, I got my grandmother. I went to school with the fire chief’s daughter, and he pulled me aside after the 3rd time and told me I’d likely dealt with more fires than some of his own firefighters. He said, when you turn 16, I’d love for you to come join the fire department. I think was around 10- years old. I was anxiously waiting and filled out my application when I turned 16, I went and joined the fire department. I hung out at the fire dept at the time, learned as much as I could and just loved everything about it. I loved when the bell rang, everyone running and getting their clothes and fire gear on, running into the truck. The adrenaline starts to rush. Once I turned 17 and was able to drive, I was going to Princeton High School, and I became a fulltime firefighter. I absolutely loved it. It was such camaraderie. I used to sleep with my fire gear right by my bed. I remember many times getting a call, getting my gear on, running to the car and driving down to the firehouse.

2) How did you come to stay with the Princeton Fire Department once you graduated High School? 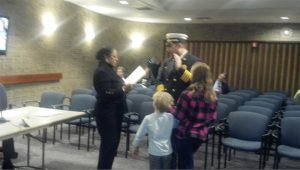 I went to college in Boston (Northeastern), did some volunteering up there, did ride-a-longs with them and kept my interest up. When I went to school I kept my Princeton pager with me, I had access to listening to communications and things and when I’d come home, as soon as I heard any type of fire, I’d be ready to go. When I moved back to Princeton in 1999, my wife and I went to a party at the firehouse and they asked me to join back again. And so, I joined. Then a few months later I went from being a firefighter to becoming a Lieutenant to Captain and then to Deputy Chief over 2-3 years’ time. I loved the job. I loved the fact that we had a great team, we had a lot of people willing to sacrifice their life for nothing.

These guys and girls you work with, you’re putting your life in their hands. Once you go into a fire, you need these people to back to up, to protect you, to be the eyes in the back of your head. Every single person going in with you, you have to trust. You have to rely on them to watch you.

During my years as a firefighter, I’ve seen many horrific things, things that will never leave my mind. But it also taught me about courage, it taught me about responsibility, about what I truly believe what a hero is. It just taught me about self-respect and, respecting life and what could happen at a minute’s notice. 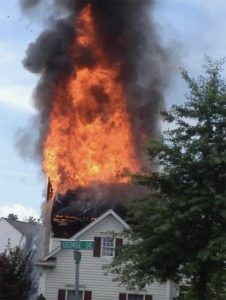 Doing it as a volunteer for no pay – you get paid in gratitude. To me it was all about helping people and just doing something good. Some people ride roller coasters because it’s the thrill. I don’t do drugs, I rarely drink, this was my high. I remember we had a fire in the basement of Westminster Choir College. It’s all cinder block, and when you’re going in it’s completely pitch black. You can’t see anything. You’re touching, feeling, using as many senses as you can use and you’re using a firehose, that’s your lifeline, the only thing that’s going to take you back to the truck. Imagine closing your eyes and seeing nothing, then you see a little glow, then you feel your face burning, face getting hot, but you still can’t really see it. That’s an adrenaline rush. Why do people do it? Same reason people go bungy jumping or parachuting. To me that was one of the things. When you’re saving people, animals, property, valuables, people’s memories, and when you come out and those people thank you, that’s an amazing feeling. To me, that’s what it’s all about. It’s not really for nothing, you’re getting something, just not getting paid.

To me, it’s one of the best jobs in the world. There’s a lot of people risking their lives to help others, sometimes they get paid sometimes they don’t. Regardless of the situation, when everyone is running out, we are the ones running in (as well as law enforcement and EMS). When there’s danger, we have to do what we have to do to try and save other people.

4) How often does Princeton fight fires?

Earlier in my career we’d have at least 1-2 fires per month. As the years went on with fire prevention, codes and different regulations, the actual number of fires decreased. We averaged about 4,000 calls overall in a year when I was Chief.

5) Besides fighting fires, share a bit about what the role entails. 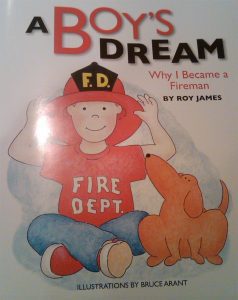 One time there was a report of a tree on fire. I responded to this house and there was a situation and instead of leaving them by themselves, I stayed in the truck waiting for assistance with the three and started speaking to the woman that lived there. She asked my story, and she said you have to write a kid’s book. Well, she became my publicist, and I wrote it in 2010. It’s called A Boy’s Dream, Why I Became a Fireman based off my responding to a family’s home. I don’t really sell it, I give it out.

Years later there was a situation where a girl saw the vacuum spark…she grabbed a phone, ran outside and called for help from the mailbox. That was the meeting spot that was defined by the family in case of a fire, something they created after her reading my book, which I handed out at school.

I like to do things like this because it’s not about the money, it’s about how I feel, how people. If I can save someone’s life or help in any possible way, that’s what this is for me.

6) We just observed the 21st anniversary of 9/11. As a firefighter, what was it like on that day and just after?

One of the most memorable things I will always remember is what 9/11 did not only to our country but to our humanity. I remember coming back from a call, being on Nassau Street and I remember seeing the image of this young kid with a skateboard helping an elderly woman across the street. We were on Witherspoon and Nassau, and I remember a group of people stopping our firetruck, dragging us out and hugging us. I remember people saying thank you. I remember people saying we love you. It was such a proud moment to be who we are or who we were at that time. Everyone appreciated all the people that died in the towers, in the Pentagon and Shanksville and in each of those locations there were firefighters, police, EMS and other civilians doing what they could to help out.

Listening to the tapes of the firefighters climbing the towers right before they’d collapse. Everyone knew something would happen, a semi-collapse or something. Yet, the firefighters still went up and were selfless.

7) You were instrumental in getting a beam from the World Trade Center to post in Princeton and commemorate those who passed. Why was it so important to you?

My wife commuted into the city every day. She stopped at the World Trade Center (WTC) and walked to 100 Wall. A few days prior to 9/11 she was ordered on bedrest. If not for the doctor putting her on bed rest, my wife and unborn child would’ve been at WTC or in the vicinity during the time of collapse. So, it hit home.

We then did rides where we’d escort a piece of steel from the WTC. I remember police and people saluting, honking, American flags all over, people clapping, cheering crying. And I said to myself, I want to do something like this. So, I had the idea to try and get a piece of steel from WTC for our town, because we had 9 people from Princeton that passed away. 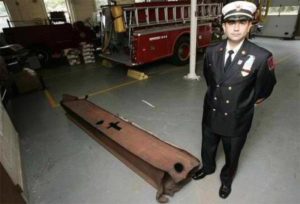 It took about 2 years, but I was able to find a 10-foot piece of steel, it was twisted like a piece of gum. When you tried to move it, it goes to show the devastation, heat, everything that happened and what people went through their final moments before they perished. When we got it, I saw the cross cutout on the side and, being Jewish, I questioned why that was there. I did some research and learned the cutouts were put there by the steel workers cutting off the steel. When they’d get a piece, they’d sometimes cut out Stars of David, crosses, hearts, words, and when they found bodies, many of them knew the families, they’d give the cutouts to the family members. That made that piece of steel even more meaningful.

We got it in 2012. There was some controversy with the town due to the cross cutout on the side, so it stayed inside a long while and just last year it was put at the new Princeton First Aid and Rescue Squad building.

8) Any last thoughts for our readers?

I salute the firefighters, EMS and police department for everything they do. I don’t think some people really understand the sacrifices, whether volunteer or paid, all of us go through and my heart and hat goes off to all of the heroes out there.

Roy James is the owner of On Target Staffing, which provides full staffing capabilities for companies throughout many of the 50 states, including permanent placement, head hunting, and executive search. After years working in finance and personnel, he opened On Target Staffing in 2001. He has also spent nearly 3 decades of his life as a volunteer firefighter with the Princeton Fire Department, having the positions of Firefighter, Lieutenant, Captain then Chief. In his free time he is also a pilot who volunteers his time to rescuing animals with the organization, Pilots N Paws.