Skip to content Skip to main menu
Home › Princeton's Leaders: Are They Creating a Better Tomorrow? › Working to Ensure Roadways are Safe for All Who Use Them 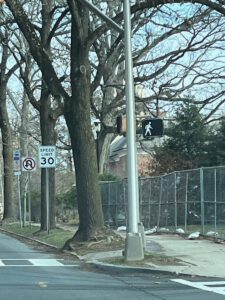 As a child, we’re all taught to look left-right-left before crossing the street. Crosswalks were created to give pedestrians a place where they have the right of way and signals have been installed to inform pedestrians when it’s their turn to safely walk. Yet, despite all of these safety measures, there were 22 accidents in Princeton last year that involved cars hitting pedestrians, with victims ranging in age from 5 to 85.

The New Jersey State Police recently released statistics on motor vehicle fatalities from 2021, and it turns out it was the deadliest year on the road, up 22% statewide for people walking or biking. While it wasn’t Princeton’s deadliest year, August’s tragic fatality on Rosedale Road is one too many. 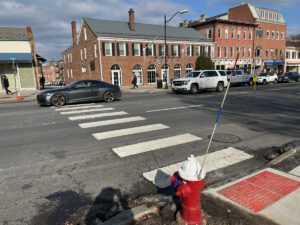 “Crosswalks invite pedestrians to walk there, that’s why most accidents happen there. Pedestrians are too quick to assume a crosswalk will protect them and while legally a car must stop, the motorist has to see there’s a pedestrian first,” explains Sergeant Thomas Murray, Princeton Police Department Traffic Safety Bureau Supervisor. “Our main adversary is growing volume and a trend of growing volume includes distracted drivers.”

When COVID hit in 2020, the roadways became virtually empty. For months and months, people schooled from home, worked from home, and intentionally didn’t go out. This also became a time when people, desperate for something to do, took up more walking and biking around town. With fewer cars travelling, 2020 saw nearly 1/3 fewer pedestrians get hit than we’ve since seen in 2021.

Yet the quiet roadways of 2020 meant a lone car on the road could travel at faster speeds and with less police enforcement reminding them to slow down. A need to keep the police force healthy and safe from COVID meant maximizing social distancing and fewer traffic stops. Attitudes about speed limits and safe driving were affected.

Another thing that 2020 brought with it was a change in attitude towards the police. Whereas in 2016 the Street Smart campaign had police interacting with 100s of locals to educate them about roadway safety, the Limit It campaign intended to educate drivers about obeying the speed limit, staying off cell phones and staying attentive was attempted from May-August 2021 and couldn’t gather the same engagement. Many had no interest in speaking to or hearing from the police, and therefore important traffic safety information was not well disseminated.

2021 saw more drivers eager to get back on the roads. That increased traffic at a time when there was already limited traffic safety education and cars were driving faster. In addition, frustration with the increased wait times at lights, an overreliance on car safety features (leading to drivers being less alert of their surroundings) and an increase of driver cell phone distractions led 2021 to be a dangerous year for pedestrians.

Throughout 2021 the Princeton Police Department reports there were 599 motor vehicle accidents. This is approximately 40% fewer accidents than recorded in 2016 and 2017, but still many are working from home and it puts things back on an upward trend. During this past year, 5% of the accidents involved pedestrians/bicyclists, the most pedestrian hits reported since the 2013 consolidation (with the exception of 2017, an unseasonable mild year that had people outdoors far later into the year than normal). All but one pedestrian hit in 2021 required medical attention. And in one instance, a man was killed.

There’s a crosswalk on Rosedale Road connecting Greenway Meadows and the drive to Johnson Park Elementary School. Advocates have long argued for the need of a crossing signal, to alert traffic to pedestrians. Increased crosswalk signage had just been put up and user-initiated flashing lights had recently been installed when an 82-year-old man triggered the alerts to cross the street. Yet he was hit and killed while crossing.

This adds to the three fatalities suffered on Princeton’s streets from 2015-2019. One of them was four years ago, when a woman walking across Washington Road was struck and killed by a truck turning left from Nassau Street onto Washington. It is believed the proper pedestrian cycle was observed and the driver may not have seen her from his vantage point in his cement truck. 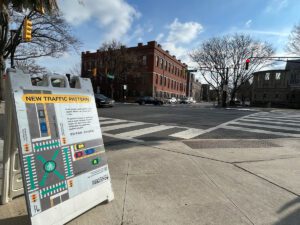 An immediate push was made to create a safer intersection and a few years later, after Princeton approached the state, providing research and going through a thorough review, an All Pedestrian Phase adjustment was made at this busy Nassau/Washington intersection. This means that cars at all four intersecting roadways stop at the same time, allowing pedestrians to cross in all directions simultaneously without the possibility of oncoming traffic.

It appears this change is here to stay, but it doesn’t come without its flaws. The time allotted for pedestrians has already been adjusted twice, as attempts are made to find the right balance for motorists and walkers. Cars also now sit longer at the light, so drivers’ frustration has increased. Some get tired of waiting and turn right during a red signal from Vandeventer onto Nassau, despite the “No Turn on Red” sign hanging there. Traffic has also increased on side roads, such as from Moore onto Nassau as people try to find an alternate route.

“I have to try, along with the county and state entities, to move traffic as efficiently as possible. To set realistic speed limits, and not inconvenience people unnecessarily,” shares Sgt. Murray.

Despite the delicate balance between vehicle and pedestrian needs, accidents happen. Murray logs each detail and works very closely with the municipal engineering department assessing those details, looking for trends, determining if temporary speed controls should be installed, if greenery needs to be trimmed or if bigger structural or interventional changes are needed. And in February 2021, Princeton Council agreed to assist these efforts and work towards a Vision Zero Policy, allowing for a team of community members, including the Traffic Safety Bureau, Engineering and Planning departments, to create a plan to make Princeton a safer place to walk, bike and drive.

In addition to the members of those departments of the municipality, representatives from around town including Princeton Public Schools, Board of Health, Human Services, Princeton University, Princeton Senior Resource Center and resident volunteers are being led by elected officials to create safer roadways through the Vision Zero Task Force. A concept that initiated in Europe and has been utilized in the United States for more than 20 years, Vision Zero works to analyze crash data and determine where most crashes are taking place to then create a plan of action with achievable goals aimed at reducing the number of deaths and serious injuries to zero. 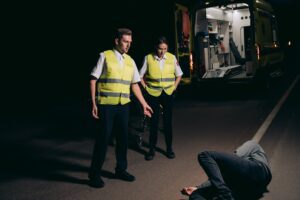 “Vision Zero begins with the premise that traffic deaths and serious injuries are preventable, and our existing techniques can be used to design for better outcomes. The US DOT’s Federal Highway Administration supports Vision Zero as part of its commitment to safety,” details Lisa Serieyssol, a member of the task force and past chair of the Pedestrian & Bicycle Advisory Committee who helped to bring Vision Zero into Princeton.

According to Serieyssol, Princeton is just the third community in New Jersey to work on a Vision Zero policy. Congresswoman Bonnie Watson Coleman is aligned with this vision, co-sponsoring a resolution in the House that aims to reduce traffic fatalities to zero by 2050 and there is a similar resolution sponsored in the Senate.

“The safety improvements may be in the areas of roadway design, policy changes, and enforcement practices,” notes Councilman David Cohen, chair of the task force. “The idea of using data to reach these decisions is that, rather than deciding to prioritize changes based on a few individuals’ theories of what will help, and where to prioritize action, we will base the recommendations on published research regarding best practices and prioritize improvements for those locations in town with demonstrated high-risk according to crash reports.”

Princeton Police Department has worked with Engineering to identify problem areas and improve several roadway intersections in the past. These include adding reflective glass beading to crosswalks to help them stand out to drivers, installing pedestrian light signals, adding a sensor to traffic lights so they time properly with moving traffic and moving back curbsides to create better vision. Vision Zero may choose to utilize more of these or incorporate any number of the Federal Highway Administration’s Proven Safety Countermeasures. Since so many of the recent accidents involve people making left turns, they might find it best to redesign them as Reduced Left-Turn Conflict Intersections or they may seek to reduce crosswalk accidents through other advanced Crosswalk Visibility Enhancements.

As 2022 is the year Princeton is fully evaluating its master plan, the Vision Zero Task Force sees this as the perfect time to identify traffic safety needs, set the goals and start looking at how to implement them.

“Even after the Task Force completes its work and issues an Action Plan, it will take years to implement – capital projects are notoriously slow and constrained by limited financial and staff resources – and real progress is also dependent on a culture shift, prioritizing safety over speed and convenience, which can be even more difficult to accomplish,” Cohen notes. “Concerned members of the public need to understand that there is only so much government can do to achieve the goal of Vision Zero, and we all really need to take to heart the importance of putting aside that cell phone, or lifting our foot off the accelerator, not just when it is easy, but also when we are running late and in a hurry to get somewhere.”

Roadway safety is a combined effort. Not only between the entities responsible for educating, enforcing and developing safe driving opportunities but for pedestrians to pay attention before walking into a road and for drivers to eliminate distractions and remember they are responsible for being alert and driving with care.

The Pulse of Princeton:
It's 2022 - Is COVID Halting Your Life or are You Moving Forward?