When it comes to protecting their kids and neighbors, adults can be relentless. And when it comes to possible life or death, they will not back down. For over two decades, concern over safety at the main street crossing nearest Johnson Park Elementary School (JP) in Princeton has had adults speaking up, working with the town and county and seeking solutions. Thanks to their non-relenting efforts, it now appears something major is to be done to slow down traffic and create a safer passageway.

“There were several near misses that JP parents shared with us over the years, and each time we heard about one, we reported it to either the engineer or the mayor. At one point, Phyllis Marchand did arrange for a meeting at JP between our P.T.O. executive board and the county officials, but that went nowhere,” recalls former Johnson Park Principal, Bob Ginsberg. “I became principal at JP in July 1999. In September, as school got underway, I observed the difficulties at the Rosedale Rd. and the Gen. Johnson Dr. intersection.” 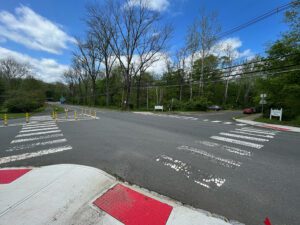 This intersection, at the entrance to Johnson Park Elementary School, is not facilitated by a light or crossing guard. All families on the southbound side of Rosedale are offered a bus, but several students and families that choose to walk or bike must cross there. Most mornings and afternoons cars struggle to make their way back from the school onto Rosedale. This site also aligns with the entrance to Greenway Meadows Park, a busy site for soccer, nature walks and more. Runners and walkers choosing to leave Rosedale Road and make their way onto the park’s trails cross here, too.

Behind the scenes, Ginsberg and parents continued lobbying for a traffic signal for the intersection, but change wasn’t coming. Unlike other roadways in town, Rosedale Road is a county road. So, the town can suggest or highlight ideas to the county, but what is done is ultimately in county control.

“Previous county engineers both communicated to Princeton that a signal was not warranted based on the outcomes of the Traffic Signal Warrant Analysis. This analysis consists of 9 different warrants, any which if met would justify the installation of a traffic signal. Based upon an analysis of this intersection, conditions for a traffic signal did not meet any of the warrant requirements (0 out of 9).] Additionally, this is why traffic light sensors were not considered as an option. Based upon the analysis of the intersection, requirements were not met. It is based on data, not feelings or opinions,” explains County spokesperson, Julie Wilmot.

Though the data was speaking one thing, the crossing was continually creating worry amongst parents and other locals. In 2010, when Lisa Serieyssol’s son began attending JP, she immediately grew weary when she noticed that within a short stretch of Rosedale Road, the speed limit jumps from 25 to 45 to 40 to 25.

“As a JP parent I really wondered why the Rosedale Rd. had a range in speed limits then JP’s school zone at the bottom of a hill.  Also, I wondered why there was no crossing guard assigned to the crosswalk. This became a bigger concern when our son and his friends asked permission to ride their bikes to school,” Serieyssol recalls.

In 2014, Serieyssol helped coordinate JP’s first Walk or Bike to School Day, which saw dozens of children and families crossing at Rosedale Rd. and Gen. Johnson Dr. For this special day, officials from Greater Mercer Transportation Management Association were invited to attend, which also forced the county to see the situation first-hand. It additionally led to more parents speaking up about how to cross safely going forward without a crossing guard or a way to slow down the passing cars, which was highlighted again to the local police and town. 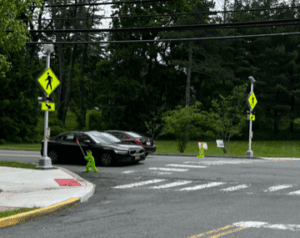 By 2017, parent Amanda (Mandy) Arshan got involved to garner more support for a safer crossing.

“I gathered signatures from JP families as well as residents in the Hun School neighborhood and Fairway Drive neighborhood since they were most affected by this crossing,” explains Arshan “I started to gather names and meet with PBAC (Pedestrian and Bicycle Advisory Committee) back when all three of my boys were in JP and we would all bike to school together. We always rode together but I felt that as my boys grew in age and responsibility, I wanted them to be able to make this crossing safely on their own.”

Arshan went to PBAC to bring the crossing to their attention, and soon found herself working with Deanna Stockton, Municipal Engineer, to apply for a Safe Routes to School (SRTS) grant in hopes to raise funds for these safety enhancements. In 2018 Princeton won the grant, a $1 million award to make improvements to walking and biking facilities through that corridor. Town and county together are still working on the SRTS plan, where the grant funds, yet to be spent, are intended to improve pedestrian and biking areas, and the county will fund the roadway improvements.

“We have been collaborating with Mercer County on pedestrian and bicycle improvements from the grant application phase into the preliminary design phase,” details Stockton. “For each of these efforts on Rosedale, conversations have included whether signal warrants were met at the Rosedale / Gen. Johnson intersection. With the SRTS project, if signal warrants weren’t met, we also included (in the scope of work) geometric changes to the intersection and consideration of other measures that could be utilized to help improve safety for bicyclists and pedestrians at the intersection.” 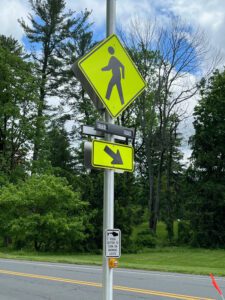 In April 2021, Princeton’s consultant recommended the installation of Rectangular Rapid Flashing Beacons (RRFB) as an interim safety measure at the intersection. According to the U.S. Federal Highway Administration, RRFB consist of “two rectangular-shaped yellow indications, each with an LED-array-based light source, that flash with high frequency when activated” and can reduce pedestrian crashes by 47%. In addition, the PBAC, led by Serieyssol, unanimously approved a resolution they presented to Council in June urging temporary solutions be installed at this intersection until a more permanent one could be completed. These conversations for the SRTS plan led to the installation of the RRFB last summer. 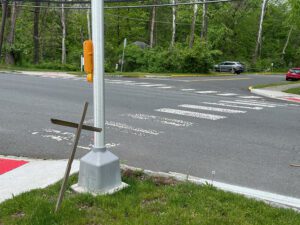 The RRFB installation was completed by the county on August 24th, yet sadly the next day, 82-year-old Pinghua Xu was hit and soon died from the injuries he incurred while crossing at this intersection. It is believed Xu activated the RRFB, but was nonetheless hit by a car traveling eastbound, as he crossed the traffic lanes. His death devastated the community, and especially those that had been fighting to prevent a tragedy like this.

“The entire PBAC and more specifically, Lisa, Mandy and I, were always pushing for new safety measures at the intersection. Mr. Xu’s death pushed the issue even further on the news for change,” adds Leslie Fabello, JP parent who started taking interest in this issue when her family entered the school in 2017. In 2019, she joined PBAC and got more involved.

The parents, working with Ginsberg and Angela Siso Stentz, the new JP Principal, began pushing harder. They started a campaign to get Town Council more involved, which included outreach to JP families and nearby neighbors. This resulted in a letter signed by 30+ locals, presented at the February Council meeting and shared in multiple local publications. A gathering was also held by the crosswalk on February 25th, marking six months since Xu’s tragic death. Together, these efforts seem to have moved things forward. 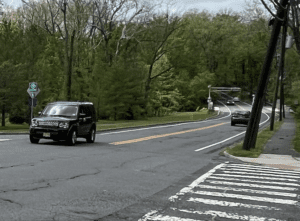 “This year we narrowed the width of the lanes (from 12’ and 13’ to 11’) as a method of traffic calming to reduce speeds,” County Spokesperson Wilmot notes. “This year, we again performed an updated traffic study and will reduce the regulatory speed limit to 35 MPH within the corridor – both directions — and will install a roundabout, which is a Federal Highway Administration Proven Safety Countermeasure and an accepted traffic-calming measure.”

Mercer County conducted a new study this year to gather new baseline data, citing the previous data was mostly collected during the pandemic and may not have reflected regular driving/walking conditions. Two meetings were held to inform people about this plan. One, for the public, took place at JP in late April, and revealed not just the roundabout proposal but also the reduced lane widths from Christopher Drive to Elm Road, pedestrian islands within the roundabout and painted warning stripes. Though not a traffic light, the roundabout signifies the call for help is getting answered.

“I am up for innovation as long as it is safe and gets done soon! (With the understanding of COVID delays) it has still taken a very, very long time to get the real safety concern on many people’s mind taken seriously and to see results,” responds Arshan. “And unfortunately, we lost a life in the process, which was the number one reason I took on this project 5 years ago. I saw the dangers in the crossings at rush hour every morning and after school and did not want a tragedy to take place.”

Fabello adds, “There needs to be continued education, especially with 4 crossings there. And I would like to hear more from the council and county on their plans for awareness and education. I’d like to understand if the county or municipality will provide a crossing guard at the intersection.”

The County is in the final design phase for the roundabout and is hoping to start construction after this school year, in late June. Full closure of Rosedale has not been approved by Princeton, so the changes are to be constructed in two phases. As the project could take 8 to 16 weeks to complete, they will accomplish as much as possible through the summer and if necessary, into the next school year.

Though not yet able to breathe a sigh of relief, Lisa, Mandy, Leslie, Bob and other municipal crusaders working with Stockton and those at the county level can feel like their efforts have been heard and change is coming.

“I sincerely hope this new proposal provides a safer way for our students, families, and community members to walk, bike and drive to and from Johnson Park Elementary School. I hope it slows down traffic, so individuals feel safe to use the intersection,” states Siso Stentz, as she envisions safer crossing for her students in the new school year.

The Pulse of Princeton:
How have you made a difference?