Skip to content Skip to main menu
Home › The Princeton Area has the Best of . . . Nearly Everything › How Princeton Attracts Audiences for Song and Stage 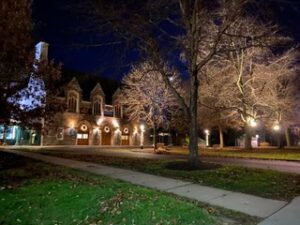 McCarter Theater is a cultural treasure in Princeton’s back yard. There’s a vibe of excitement, creativity, “happening” and buzzing energy in the place that is its signature. A state of the art performing arts center situated between New York City and Philadelphia – on the campus of Princeton University – McCarter has a celebrated history of featuring world class talent and launching hit shows dating back to 1929. Whether you walked the halls then – or enter our doors now – the vibe is palpable: a prestigious and active creative hub where world class performers, headliners, groundbreaking artists and burgeoning talent light up the stages and fill the rehearsal studios.

McCarter is also in and around our communities all year-round – connecting locally with on site and virtual classes for all ages, in school residencies, summer camp, student matinees, a Shakespeare reading group and topical engagement events. During the pandemic we did what artists do best – improvised! We partnered with Palmer Square on a free outdoor concert series, and launched award winning virtual programming – Bard at the Gate with Pulitzer Prize Winning playwright Paula Vogel. 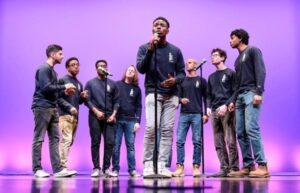 The theater is uniquely positioned as a multi-disciplinary creative hub at the intersection of arts and ideas – celebrated for artists of the highest caliber, the creation of new work, the Tony Award for Outstanding Regional Theatre, presenting work with a point of view, sparking conversation – and a place where the audiences of all ages can find meaning and joy. McCarter’s relationship with Princeton University further distinguishes us as a destination for dialogue where the arts provide a portal to the prescient issues of our time and allow a diverse range of voices and perspectives to be heard. Together with the University, we share a long history of unique collaborations and partner projects including the Princeton and Slavery Project, the Migration Plays, a groundbreaking free virtual theater experience called The Manic Monologues, creating a conversation around mental health through the arts – and in the pipeline, a commissioning project around the work of Toni Morrison through the Princeton archives.

McCarter continues to be a favorite spot for celebrated tours, headlining artists, famous solo performers, and shows that have gone on to global fame. The list is expansive – from theater, classical, jazz, pop, rock bands, dance, spoken word, comedy, family shows, student produced events and since the pandemic, virtual experiences that are accessible to audiences all over the world. 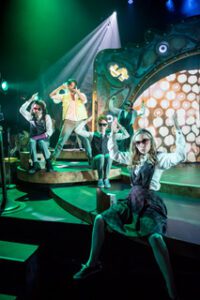 The high caliber of talent continues – and it’s right in your backyard. On April 30, 2022 performances begin for an extraordinarily timely musical – Ride the Cyclone – directed by McCarter’s new Artistic Director Sarah Rasmussen, about the power of human resilience in the face of adversity. On June 4th, the highly anticipated annual Gala – a party not to be missed – features the incredible jazz, soul and gospel vocalist Gregory Porter.  And following, McCarter’s Jazz in June series has a packed line up of stars.

But the real stars are the people behind all these hit shows and generations of talent. McCarter’s staff, Board of Directors, donors, University partners, community collaborators, audiences, students and friends are what makes the place a unique stand out. When you are at McCarter, whether for a concert, a play, a talk, a class, a drink in the Member Lounge, or a first-time peek-to-see-what-its-all-about, you will feel that special vibe, and you will understand why it’s the best cultural community spot in town.

Debbie Bisno
Debbie Bisno joined McCarter Theater, a Performing Arts Center in Princeton, NJ in 2016 as the organization’s Resident Producer. In 2022, she became McCarter’s Director of University and Artistic Partnerships, focusing on expanding and deepening the theater’s relationship with Princeton University. Debbie’s career spans Broadway, Off-Broadway, London’s West End, US regional and nonprofit theater. Broadway highlights include the recent Tony Nominated production of Terrence McNally’s Frankie and Johnny in the Clair de Lune starring Audra McDonald and Michael Shannon. Other Broadway credits: Grace, War Horse, HAIR, Merchant of Venice with Al Pacino, Annie, Priscilla Queen of the Desert. Off-Broadway and UK shows: Ingmar Bergman’s Through a Glass Darkly starring Carey Mulligan, Passion Play, and Sondheim’s Merrily We Roll Along. Debbie was the Co-Founder and Producing Artistic Director of Chicago’s Roadworks Productions, an independent theater ensemble that held residencies at Steppenwolf and Victory Gardens Theaters, producing over 20 World Premieres by playwrights including Mike Leigh, Kenneth Lonergan, Eric Bogosian, Phyllis Nagy, and more. Debbie is an Advisory Member of NYC’s Playwrights Realm and on the Board of FASPE. She is a graduate of Northwestern University and lives in Princeton with her husband David Goldman and their Portuguese Water Dog, Bernice.
Share this article

The Pulse of Princeton:
Why do people come and live in Princeton?