Skip to content Skip to main menu
Home › Nuisance or a Necessity? Physical Changes You May Encounter Around Princeton › Princeton’s Necessary Sewer Improvements Could Come at a Cost to Users 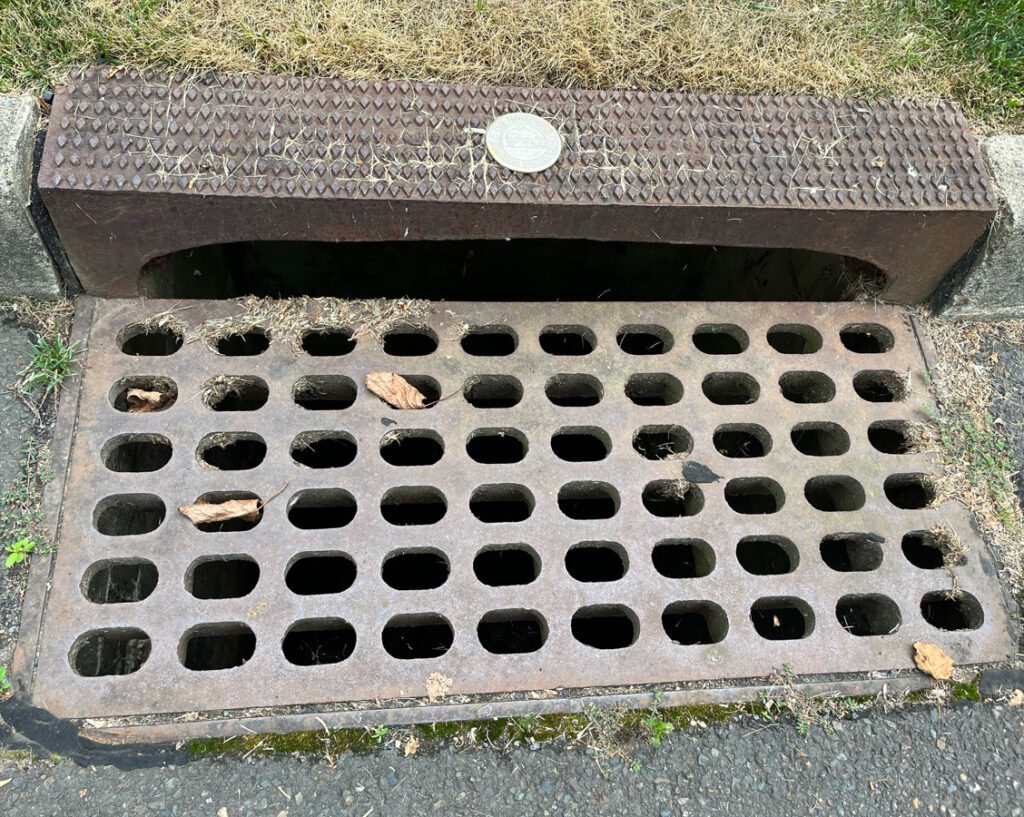 Mini systems, trunk lines, pump stations. You may not be familiar with these terms, but they all refer to aspects of our sewers. Most people don’t notice sewers (if they’re working right) as they’re not pretty or fun to talk about. But they are an essential part of many Princeton resident’s everyday lives. In fact, almost all homes outside of the northwest region of town are serviced by public sewers, that’s nearly 80% of Princeton homes. And while one may normally get bleary-eyed and tune out upon discussion of sewers, if you’re going to be paying for it, you may want to know what you’re paying for. 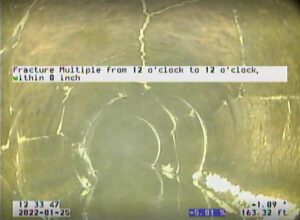 If the sewers aren’t kept in tip-top shape, that could lead to unnecessary problems and expenses. It’s recently been assessed that leaks in the pipes (which are intended to be water-tight) are allowing rainwater and groundwater to seep into the sewer system and 40-50% of the total flow is coming from that unwanted water. That means local sewer users are paying to treat water they are not generating. Deferred maintenance and age (Princeton’s system is significantly older than our neighboring communities) got us to today, where many parts of the Princeton sewer system need to be addressed. It appears some things hadn’t been tended to properly in the past, but today’s municipal administrator and staff are keenly on top of what’s wrong and needs to be done.

“We know that when it rains, our sewer flows are greater than when it doesn’t rain. We also know that when groundwater, for which the Stony Brook flow is a proxy, is higher, we get higher flows and when the Stony Brook is low, we get lower flows. Therefore, we know that rainwater and groundwater are leaking into our system,” shared Chair of the Princeton Sewer Committee (PSC), David Goldfarb, in response to questions posed by Princeton Perspectives at their July meeting. “We know there has been deferred maintenance. We know there have been needs that have not been met. We’ve identified them. That’s why we are where we are.”

At the June 13th Council meeting, an informational presentation was made by Goldfarb and Andrew Filippi, Sewer Engineer, which laid out a proposed Sewer Plan Investment through 2031. The plan shows an approximate $7.25m cost per year for the next nine years to replace mains, repairs and Inflow and Infiltration (I&I) reduction, replace “trunklines”, repair and replace pumpstations, and to replace vehicles and equipment. There is also another $3m per year needed to “catchup” on deferred maintenance and replacement work. Though not approved through a formal vote, the Mayor and Council gave the go ahead for PSC to make and present future plans.

“The annual repair plus the catchup expenses, it is a lot of money, it’s no question. But the sewer business is an expensive business,” Goldfarb explained. “Sewage collection and treatment is not cheap. We have calculated the reasonable lifetime for our pipes and what it would take to maintain them on a responsible schedule. We’ve identified the amount that is necessary to ramp up to that point. These are not just shots in the dark, they’re based on construction data that is fairly standard across the industry.” 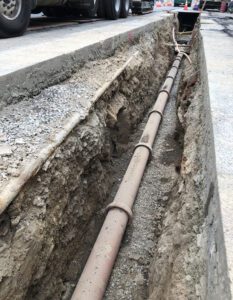 The 2022 fee for the average single-family sewer user in Princeton is $435. If things go as planned, every year until 2031, that bill will increase approximately $40-50 to cover debt service and operations and maintenance needs, which will be in addition to the Stony Brook Regional Sewerage Authority treatment fees traditionally charged. By 2031, the average fee could be $841. This assessed fee, added to the tax bill, is only paid by those homes served by sewers.

Princeton has a sewer system that extends approximately 130-150 miles and much of the pipe used has not yet been converted to PVC, now the industry standard. The town’s underground also consists of a lot of hard rock (compared to West Windsor’s sandy soil consistency) which allows water to accumulate, making it more likely to leak into the system.

“Nothing lasts forever, everybody knows that. The plan we presented to the Mayor and Council gets us to a point where it’s reasonable to expect that we will be able to continue indefinitely investing at that level and maintain our system, so pipes are replaced before they create problems and at the end of their useful lifetime,” Goldfarb added.

Though a future nine-year budget has been laid out, that does not mean the finances and project allowances are set in stone. Each year, the current Council must approve both a 6-year capital plan and a plan with capital spending for the coming year. That will give the department the go-ahead to put projects out for bid. The town only legally commits to go through with them once Mayor and Council approve the bid awards for each project.

It is expected that once the town catches up on all the deferred maintenance by 2031, the annual budget will be reduced to approximately $6.5m to allow for continued regularly needed work. The Princeton Sewer Committee discussed at the July meeting that if the roadways were in the condition our sewers are currently in, residents would be pressuring council to make an investment.

“It’s just one type of infrastructure. Our roads are one type, they get more attention. They get potholes, it gets attention, it gets fixed, but the sewer is much more invisible,” Councilwoman Eve Niedergang noted. “We see it remotely in data flows or occasionally when there’s a break, but we don’t observe it in the same way.” 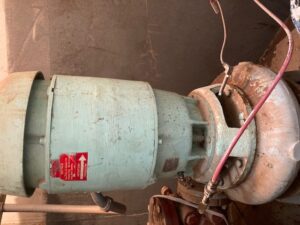 Last month Council approved approximately $5m in capital for 2022 sewer projects. Over the next month or two, pump stations across town that are near or have reached their end of life are being analyzed to figure out the best technological options for replacement. The six included are All Saints, Crooked Tree, Herrontown, Mercer, Winfield and Pretty Brook. Once analyzed, a full design and specifications will be configured with hopes of being ready to award a contract later next year.

“The purpose of the study and design phase is to evaluate the current technologies as well as evaluate the current resiliency that our pump stations have when faced with the hazards of some of the recent storm events we have had (Tropical Storm Ida most recently). Reconstructing our pump stations to be more resilient is critical in being able to operate our collection system in the most efficient way possible,” explains Princeton’s Sewer Operations Manager, Dominick Itzi. 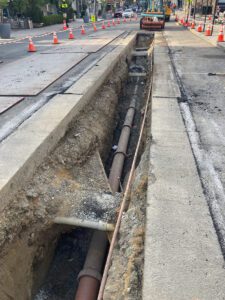 As the Witherspoon Street Improvement Project takes place, the town is also taking advantage of the timing to evaluate the sewers and perform necessary replacement. Clay pipes are being laid here, which is known to be more environmentally friendly. This is currently happening in the area between Nassau and Springs Streets while simultaneously, the portions laying under Phases 2 and 3 of the construction project, are being evaluated.

You may have also noticed work underway along Mt. Lucas Road, known as the Mini System 35 Sewer Rehabilitation Project. All residents in that area have and are being kept abreast of what’s happening, as the amount of water entering the system (Inflow and Infiltration) was studied. It’s been determined that there has been too much groundwater inflow, and so work is ongoing to try and grout the cracks and joints as well as do repairs and replacement of the sewer mains, as needed. Nearby Mini Systems 36 and 36A are up next for evaluation and improvements. These projects, like all going forward, are being planned to have minimal impact on the local community.

“A lot of our I&I reduction work is going to be minimally disruptive because it’s not going to require excavation. We have a lot of work that is not in municipal roadways, it’s in easements and unpaved right of ways where we’re not going to be disruptive to traffic because it’s not in the road. That accounts for a very significant amount of our projects,” Filippi details. “The work we will do that is in the roadway in terms of replacement, excavating manholes, we’re going to try and time those as much as we can with road reconstruction projects that are going to happen so that we can get all of our infrastructure repaired and replaced together, to create as little disruption as we can.”

The goal is to coordinate with other underground utility work as well, so that if roads are being opened, any work needed in that area is completed before the road is closed back up. 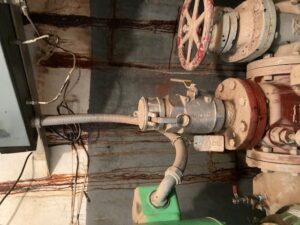 Using flow-metering data from 2017-2019, the sewer department is also now figuring out which areas of town need to be rehabilitated first and this will be the basis of the next 6-year plan.  While the rehabilitations and repairs take place, you may encounter some roadway and household disruptions, but they’ll likely pale in comparison to what could be, should the town not take these actions. And now, going forward, you’ll think about and be grateful for updated mini systems, pump stations and trunk lines each time you flush your toilet.