Skip to content Skip to main menu
Home › Nuisance or a Necessity? Physical Changes You May Encounter Around Princeton › What is Needed to Make Princeton Battlefield an Historic Destination?

On February 18, 1973, The New York Times ran an article about the planned expansion and improvement of Princeton Battlefield State Park. These improvements using state and federal funds included acquisition of additional acreage for the battlefield, reconstruction of existing barn structures as a visitor center and museum, and walkways leading visitors from area to area on the battlefield. A little more than a year later on May 9, 1974, The New York Times published another article about the park detailing efforts and plans to restore and develop the park landscape and period buildings using state funds to do so. Each of these articles noted that the development and completion of these projects was in preparation for the nation’s Bicentennial in 1976.

Nearly 50 years later and on the cusp of the nation’s Semiquincentennial, or 250th anniversary, in 2026, we are still having the same conversations and awaiting the completion of the same projects described in those articles a half century ago. On the eve of this celebration, the State of New Jersey and the federal government once again have the opportunity to turn the Princeton Battlefield into its rightful place as the national historic destination it deserves to be. But will they seize this opportunity in time?

The Battle of Princeton was the culminating event of the period between December 25, 1776 and January 3, 1777 historically known as the Ten Crucial Days. The clash of American and British forces on the farmlands of Quaker brothers Thomas and William Clarke forever changed the direction of American and world history. The battle elevated George Washington’s military leadership in the hearts and minds of his soldiers and the nation. It demonstrated the versatility and potency of the newly established Marine forces as they fought and took casualties during their first land battle. The victory at Princeton allowed American forces to secure the state of New Jersey from falling into British control ever again, ultimately influencing the British strategy in the war. As historian, Sir George Otto Trevelyan stated about this ten-day period, “It may be doubted whether so small a number of men ever employed so short a space of time with greater and more lasting effects upon the history of the world.” The Battle of Princeton demonstrated the American resolve for achieving independence. 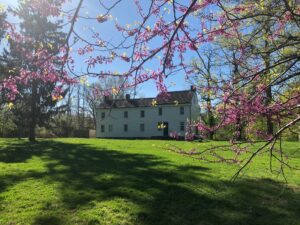 The battlefield, designated on the U.S. National Register of Historic Places and as a U.S. National Historic Landmark District, as well as on New Jersey’s Register of Historic Places, lies in a beautiful setting a little more than a mile outside of downtown Princeton. While the park itself is nearly 100 acres of open and rolling landscape, there is currently little on site to orient a visitor or entice them to spend time to learn about the historic and cultural events that took place there before, during, or after the Battle of Princeton and the American Revolution. Those walking the grounds of Princeton Battlefield State Park are met with minimal signage and no proper visitor/education center as are found at other New Jersey Revolutionary War state parks and sites. Someone visiting the park may even conclude that more visitors come to hike in the woods behind the park, owned by the Institute for Advanced Study, than to learn about the history changing battle that took place there in 1777. 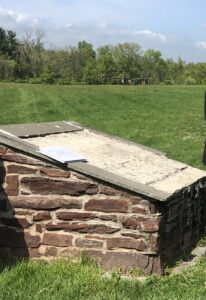 In 2018, there was nearly $1.4 billion in revenue from an estimated 3.5 million visitors in Mercer County. After dealing with the recent drop in tourism from the pandemic, numbers are currently returning to near pre-pandemic levels. Noting this increase in tourism, immediate reinterpretation and preparation of the Princeton Battlefield would create an additional resource to entice visitors to extend their stay in Mercer County. The appeal to visitors, whether they are students, teachers, families, or organizations is that the park would be a dynamic, educational, and engaging experience covering a spectrum of historic and cultural America. Ideally, people would visit the battlefield and gain a broader understanding of early colonial life and how world events impacted this regional community, while at the same time benefiting the local businesses and industries nearby. 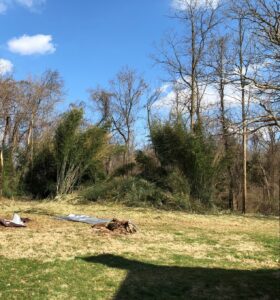 Two weeks ago, the New Jersey Legislature passed the largest budget in New Jersey’s history. Of the $50.6 billion total, $25 million is slated for capital improvement of state-owned Revolutionary War sites and parks. Back on May 16, 2022, Assemblymen Roy Freiman (D – Dist. 16) and Ronald Dancer (R – Dist. 12) co-sponsored the Assembly Concurrent Resolution No. 147. This resolution called for the State of New Jersey to establish a visitor’s center at Princeton Battlefield State Park, noting that doing so would “greatly enhance the public’s learning, understanding, and interpretation of the site’s importance to New Jersey and American political, cultural, social, and military history, as well as encourage more awareness and support for preserving the site for generations to come.” News of this caliber is certainly one that New Jersey’s American Revolution historic communities are grateful for and gladly welcomes. With so many sites having a multitude of needs, we hope this type of funding and advocacy can continue each year as we prepare our facilities and sites for the 250th celebration. However, while there has been much support and optimism provided by New Jersey legislators and members of the Division of Parks and Forestry regarding the reinterpretation and updating of Princeton Battlefield State Park, many conversations have had to focus on the repairs needed at the park instead of on the potential interpretations and additions that are desired for the celebration. Nevertheless, these repairs are urgently needed. The Thomas Clarke House requires a period appropriate update and renovation that would best demonstrate the daily lifestyle of 18th century Quaker farmers. The accompanying barns mentioned in the New York Times articles have become so overgrown with invasive vegetation that one foundation was just rediscovered only a few short weeks ago. On the west side of the battlefield stands the Colonnade, long used as a memorial gateway to the grave site where the bodies of both American and British soldiers lie intermingled for eternity. Through decades of neglect, this iconic feature of the park has become stained and is in need of significant restorative attention. 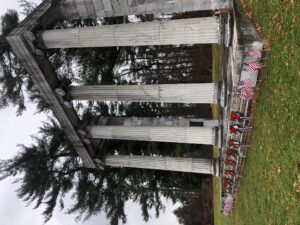 Princeton Battlefield State Park has the potential to become a world class tourist destination, especially with this infusion of State capital funds to upgrade and repair these historic structures. This can only happen if we commit to sustained investments in visitor experiences and signage which will dramatically bring to the forefront an awareness, understanding, and appreciation of what took place on this historic land. In these efforts we also look to the American Battlefield Trust, which recently purchased the 15 acres of Maxwell’s Field for the park’s expansion, to continue as a partner with us in telling the terrain’s military and human stories. Through the Trust’s efforts to develop a new interpretive design for the battlefield, a three-way partnership with the State and the Princeton Battlefield Society will make things happen. We can choose to celebrate the nation’s 250th anniversary with Princeton Battlefield as a centerpiece of that celebration or we can wait another 50 years to have this same discussion all over again.

Michael Russell was elected president of the Princeton Battlefield Society in 2021 after becoming a trustee and the Site Committee chairman in 2018. He is a member of the New Jersey Society of the Sons of the American Revolution and can trace his family’s New Jersey history to the late 1600s and early 1700s. Michael has been involved in American Revolution advocacy and preservation in New Jersey since 2008 with such organizations as the Battlefield Restoration and Archaeological Volunteer Organization (BRAVO) and Crossroads of the American Revolution National Heritage Area. He has been a public school teacher for the past 23 years and holds a Masters degree in Military History from Norwich University and a doctorate in Civil Security, Leadership, Management, and Policy from New Jersey City University. Michael is also an active member in the Freemasons in the state of New Jersey.