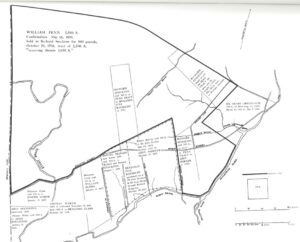 Without question, Princeton is one of the most historic places in New Jersey. People can scarcely drive a mile without seeing one or more historic structures or institutions. With history dating back to pre-European colonization, even the roads on which we travel have incredible historic value. Other towns have forsaken their historic buildings in favor of development; thus, it remains one of the great feats of historic preservation that there are structures from the early history of Princeton still around today and several are open to the public. Many of the historic structures still standing in the region, can provide understanding and a sense of the early colonial daily life of Princeton. This is especially true of the Quaker Community which inhabited the region to the south-west of the town.

Ironically, a homestead that sat in the middle of a terrible battle is one that survived, one of the ancestral homes of the Clarke Family, upon whose land the Battle of Princeton was fought on January 3rd, 1777. This, despite the family being Quaker pacifists and objecting to the war. The American Revolution came to them regardless and linked their name to the wartime annals of American history.

The Clarke family was one of many who founded the Quaker Settlement of Stony Brook. Formally established in the 1690s, the Quaker Settlement of Stony Brook was located just a mile or so south-west of the small college village of Princeton. It was nestled in and around the bend of the winding stream from which it took its name, the Stony Brook. The settlement was founded by a handful of Quaker families, among them recognizable names for any Princeton local – Worth, Stockton, Olden, and of course, Clarke.

The land of this region has always drawn settlers to it.  Thus, it comes as no surprise when studying its early history that it captured the attention of the native Lenni Lenape and early settlers alike. Bordered by the Stony Brook and Millstone River, the rolling hills and fertile farmland made it a picturesque and bountiful place to call home. By the 1670s this region had attracted the attention of many individuals, but especially members of the Quaker communities in nearby Burlington and Piscataway.

One of these was Benjamin Clarke Jr. (1670 – 1747), who in 1695 purchased some 1200 acres of land on the south side of the Stony Brook. The property ran north to the old Kings Highway or Post Road (modern day Route 206), west to the Province Line Road, and to the lands owned by Richard Stockton on the east. Benjamin and his wife Ann built a homestead here just north of the southern crossing of the Stony Brook, on the Quaker Road (Quaker Bridge Road) portions of which still survives today as the “Eno House”.

One of Benjamin’s lasting legacies was his commitment to creating a Meetinghouse and burial site for the growing Quaker community. In 1709 Richard Stockton Sr., Clarke, and others conveyed in trust just under ten acres of land devoted to the Stony Brook Society of Friends to act as the spiritual and physical center of the growing Stony Brook Village. This first meetinghouse stood until a fire in 1759 destroyed much of the building. It was replaced in 1760 and remains standing to this day, still an active Friends Meeting.

Benjamin and Ann had ten children together. Their second son, Benjamin Clarke III (1698 – 1742/43), inherited from his father the homestead near the Stony Brook in 1721. He died shortly after the birth of his son, Benjamin IV (1742 – 1816) who inherited the farmstead thereafter. When Benjamin IV passed, the land was transferred to his sons David and Elisha. Elisha’s son Joseph would be the last Clarke to own the home and property, having no male heirs to pass or sell it on to.

John Clarke (1700 – 1768) was the third son of Benjamin Jr and Ann Giles. In 1722 he purchased the land from his father which was “bounded on the east by John Olden, on the north by the Post Road (RT 206), on the west by Joseph Worth’s land and the burying ground, and on the south by Benjamin Clarke (III) and the brook; together with a piece of woodland by estimation ten and a half acres”. On this land he and his wife, Sarah Field, built a homestead. This structure survives as part of the present-day Updike Farm which is owned by the Historical Society of Princeton. Together, Sarah and John had nine children. It was destiny that this location and family have active roles in the fateful Battle of Princeton. All of the homes and land owned by the children of John and Sarah would have some part to play in the battle and occupation of Princeton at the end of the century.

The Clarkes and The Battle of Princeton

William Clarke (1736 – 1802) was John Clarke’s oldest son. Upon John’s death in 1768, William inherited most of the land previously owned by his father. His home, no longer standing, rested at the crest of the hill near where the Mercer Manor once stood just off the Battlefield on the property of the Institute for Advanced Study. William Clarke’s apple orchard inadvertently became the centerpiece of the Battle of Princeton, and his home was riddled by shot and shell. William and his wife Ann had fourteen children together, many of whom would remain in the area and inherit various homes from their relatives.

Thomas Clarke (1742 – 1802) was the fourth son of John Clarke. In 1772, Thomas purchased nearly 200 acres of land from his elder brother William which was “bounded by the Stony Brook, the meeting house lot, land owned by Benjamin Clarke (IV), land of William Clarke, by the great road (RT 206), and by the land belonging to Robert White and Matthew Clarke.” Thomas Clarke’s home was constructed shortly thereafter and possibly built out of or on top of an original structure. At the time of the Battle, Thomas lived with his sister Sarah Clarke (1752 – 1840) and an enslaved woman owned collectively by the Clarke family named Susannah (1749 – ????). The three hid in the root cellar below the house during the battle, and afterwards helped to care for wounded men on both sides. Brigadier General Hugh Mercer died in Thomas Clarke’s house nine days after the battle. Upon Thomas Clarke’s death in 1802, Ezekiel Clarke (1746 – 1809) the sixth son of John Clarke, inherited his brother’s lands and home. Ezekiel did not live long after and left the home exclusively in the hands of their sister Sarah. Sarah passed in 1840 and left the home and property to her nephew John H. Clarke (son of her brother William). John would be the last Clarke to live in the residence, selling it to the Hale family in 1862.

The Stony Brook Village ultimately did not become one of the major Quaker settlements of the period and was ultimately incorporated into Princeton during the 19th century. You can trace the ongoing story of this small, but prominent Quaker settlement from Princeton’s early colonial history to today. Step back in time to a place of open farm fields and rolling hills as you explore the historic village of Stony Brook from the perspective of the Clarke Family. You can visit many of these locations today, though some are private residences, as is the case with many of the historic homes in Princeton. Below you will find surviving structures which belonged at one time to the Clarke Family.

This house, first constructed in the late 17th century was the first home built by the Clarke Family. The home survives today as the Eno House, named for its 20th century owner, and has undergone extensive renovations and additions over the course of its lifetime. It is in use today as housing by the Institute for Advanced Study. Private.

The Meetinghouse is still in use by the Princeton Friends Meeting, but you can visit the exterior and adjoining graveyard. The interior is open on special occasions like the Fourth of July.
www.princetonfriendsmeeting.org

This building is owned by the Historical Society of Princeton. You can check their website for their hours of operation.
princetonhistory.org

This house is owned and operated as a historic site and museum by the New Jersey State Park Service as part of Princeton Battlefield State Park. Information for visiting the house and battlefield can be found here. www.njparksandforests.org/parks/princetonbattlefieldstatepark.html

This small unassuming red cottage was built in the early 1700s, possibly 1725, with additions to the southern section around 1770, on land owned by Benjamin Clarke Jr.

It is a private residence located on Mercer Road near the Princeton Battlefield State Park. It is visible from the road.

Other Clarke Family Buildings
All three are private residences

487 and 481 Stockton St – Early 1700s construction. Probably belonged to James Clarke (brother of Benjamin III), and was later used by David Brearly of Lawrenceville. The 481 property was built on the same lot and may have been used as a blacksmith shop.

Will Krakower is a graduate of Rutgers University Camden with a Masters in Public History. His interests cover a wide swath of American Cultural and Military History, specifically the Early American Colonial Period. He works as an historian for the New Jersey State Park Service.